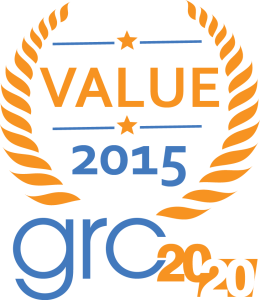 GRC 20/20 measures the value of GRC engagement around the elements of efficiency, effectiveness and agility. Organizations need to be:

The 2015 GRC Value Award nominations will be accepted through October 5th (no exceptions, nomination form closes down at midnight CDT on October 5th). Recipients will be determined by mid-October with announcements in November.

The 2014 GRC Value awards are to recognize GRC solutions that have returned significant and measurable value to an organization. The nomination must be on a specific implementation/project in a verifiable client.  No generalizations or consolidations of multiple clients.  The GRC Value awards are to acknowledge specific QUANTIFIABLE value in a specific instance.  These are cold hard facts that empirical, measurable, and objective. Every nominee if selected for final recognition (both solution provider and client) must be willing to spend up to an hour on the phone (separately and not together) to discuss the submission and validate accuracy of submission.  Only the top nominations in each category will go through the validation process.

All award submissions are based on a single real-world implementation.   Factual accuracy and integrity is necessary.  GRC 20/20 will take all the nominations and select in each category the submissions that articulate the greatest quantifiable value in objective, measurable terms.  We are looking for hard facts not just soft bullet points.  Time saved, dollars saved, FTEs reduced.  Numbers win, generalizations lose.  Every submission must have contact information of the organization that claims to have received this value.  These organizations will be contacted and interviewed to determine if they have actually received the stated value as portrayed.  Any misrepresentation of issues found will disqualify the nomination from receiving the award and the next set of nominations in each category will be evaluated.

Each recipient of an award will be written up and acknowledged.  Details of the nomination will be referred to but can be handled anonymously (if formally requested) in award announcements/communications from GRC 20/20.  So the client reference case study does not have to be named and can be anonymous, but GRC 20/20 must be able to know who the client case study is and validate the facts.

The seventeen categories for submission are:

Please submit nominations before midnight on October 5 2015.  Nomination forms will be accepted until this date, finalists selected and deeper dives in mid-October, with recipients selected by end of October and announced in the beginning of December.  Award recipients will be announced to vendors end of  October so that coordinated announcements/press releases can go out in the beginning of December.

NOTE: You must be logged in (with a free account or GRC Advisor account) to see the 2015 GRC Value Nomination Form below.  There is a save and continue button at bottom of form.

A Strategic Approach to Third Party Management, Part 2: Designing an Integrated Architecture to Support Your Strategy