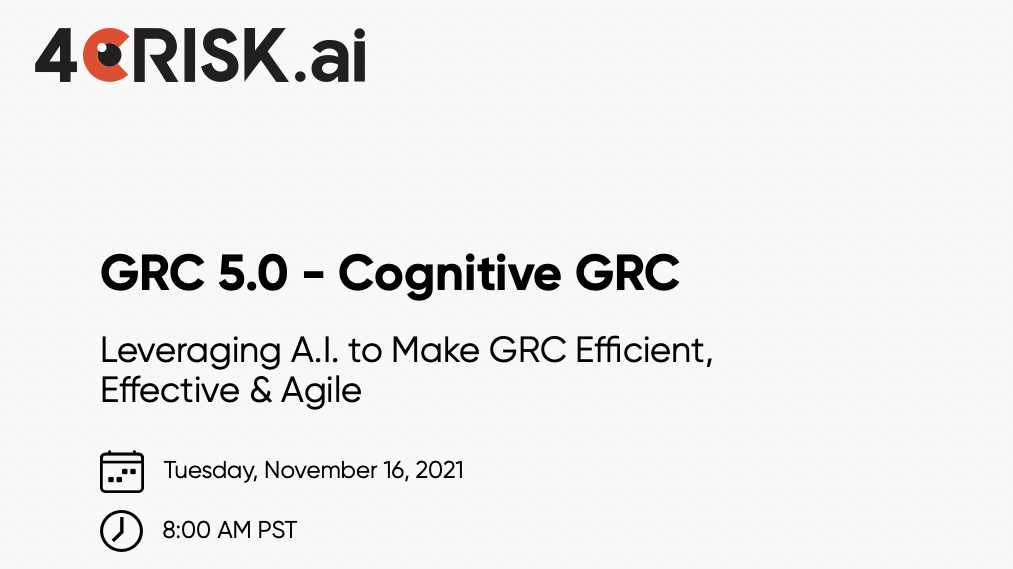 As 2022 approaches, GRC technology is making a shift to Cognitive GRC, GRC 5.0, that leverages artificial intelligence to integrate and make GRC infrastructure and architecture more efficient, effective, and agile. Machine learning, natural language processing, and predictive analytics are taking hold and providing greater value to Agile GRC (4.0) technologies by taking them to the next level.

This webinar explores the role of artificial intelligence (cognitive GRC) that can integrate and provide greater value in governance, risk management, and compliance as the organization aims to reliably achieve objectives, manage uncertainty, and act with integrity.

Attendees of this webinar will learn:

GRC 20/20 ResearchMichael Rasmussen – The GRC Pundit @ GRC 20/20 Research, Michael Rasmussen is an internationally recognized pundit on governance, risk management, and compliance (GRC) – with specific expertise on the topics of GRC strategy, process, information, and technology architectures and solutions. With 28+ years of experience, Michael helps organizations improve GRC processes, design and implement GRC architectures, and select solutions that are effective, efficient, and agile. He is a sought-after keynote speaker, author, and advisor and is noted as the “Father of GRC” – being the first to define and model the GRC market in February 2002 while at Forrester Research, Inc.

OneTrust technology powers privacy, security and trust programs. More than 5,000 customers use OneTrust to build integrated programs that comply with the CCPA, GDPR, LGPD, PDPA, ISO27001 and hundreds of the world’s privacy and security laws. Our offerings include:

The OneTrust platform is powered by the OneTrust Athena™ AI and robotic automation engine, and our offerings include: